More in this section

The POWERgrass hybrid pitch offers better traction, stability and softness, in short, a safe playing surface because it reinforces the sod of natural grass! The player quickly becomes familiar with the playing surface and is more focused on the action, offering more spectacle.

Hybrid pitch POWERgrass not to miss a step 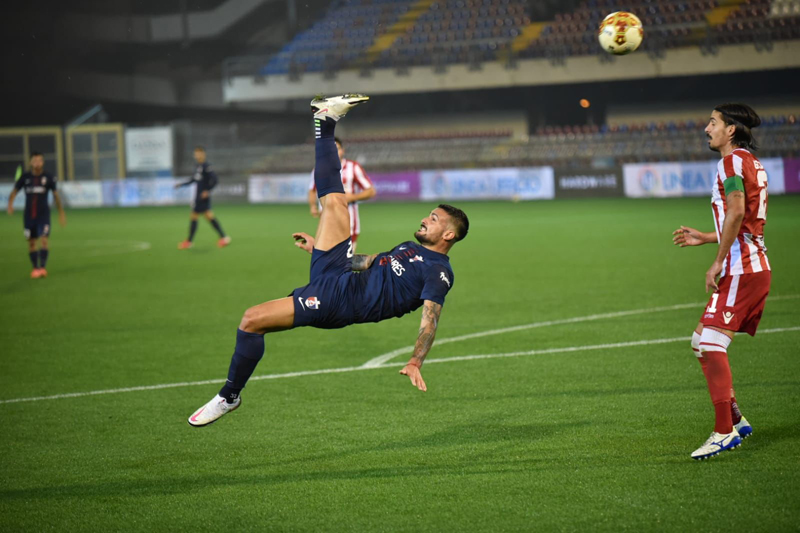 Lescano during a scissor kick with Samb

Coaches explain that ball control is the most important aspect of playing football. If the player can stop the ball on the first bounce, he has achieved a basic goal. In the POWERgrass hybrid turf the bounce of the ball is natural and the player is supported by the reinforced grass so that the athlete can move quickly, make safe cuts and never miss a step.

In the POWERgrass hybrid turf, the player feels safer, so he is more likely to mark and recover the ball by sliding, offering a spectacular game without risking abrasions on the skin, a characteristic of synthetic turf fields, while, in natural grass fields, avoiding sprains when the turf sod rises making the foot sink and which we often observe when the rooting is poor, especially during the winter period.

The topic of player safety has been addressed by numerous studies over the years. Some have made the case for the superiority of natural grass over synthetic turf and provoked an outcry from the industry. Others have indicated that there are no substantial differences and that in some cases synthetic turf is equivalent to natural grass. Proving the truth seems to be a lost cause for the greens; the industry is very influential and has the resources to argue the opposite.

In some cases, even the claims of the players seem to count for little. Some argue that it is a matter of habit and that future generations, used to playing on artificial turf, will not complain, but that is only because they will not know how much better it is to play on natural or hybrid grass.

Now you can play safely on a pitch with:

In hot weather, only natural grass offers a comfortable environment for athletes and spectators. Natural grass through the process of transpiration also cools the air and the environment like all other plants. During the summer period, if fed correctly beforehand, through careful management of irrigation water it withstands the heat stress of summer and increases its ability to cool the environment by consuming reduced amounts of irrigation water. The POWERgrass technical staff recommends the installation of large storage tanks to store the rainwater filtered by the lawn and collected through the drainage system to be used for irrigation for at least 7-10 days during the dry period.

The researchers concluded that the transfer of heat from the surface to the athlete's foot provides a physiological stress that can lead to serious heat-related health problems. The application of an irrigation system helps, but does not seem to solve the problem completely as the temperature rises again to high values after 15-20 minutes. Source Penn State University https://plantscience.psu.edu/

Ask for a free estimate, it's easy!

All fields are required!